According to the Finance Minister of Pakistan, a revised list of profit rates gets issued on several National Saving Scheme certificates. This new notification gets issued on 21-1-2021, Thursday.

The profit rates of each certificate have a different percentage. For the convenience of all of you, we are enlisting the increased profit rates here below. Go and check them out:

According to the notification, the profit rate on Short-term Saving Certificates also increases. The increasing profit rate is different for the short-term certificate of each month. The values of new rates are as follow:

Other than that, the profit rates on Saving Accounts have now risen to 5.5%.

Here above, we have mentioned all the previous & new profit rates for each National Saving Certificate. You can check out the status that is relevant to you. Work on the further instructions will start from the announced date 22-1-2021 as per Finance Minister. 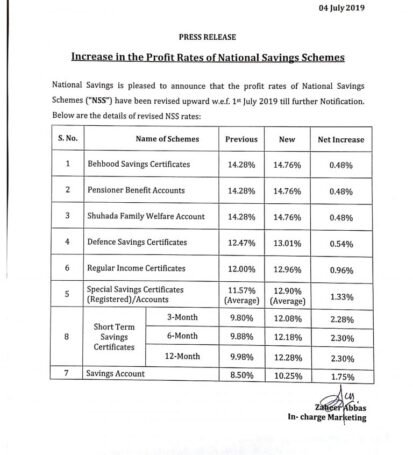